A Road Trip Through America in Decline 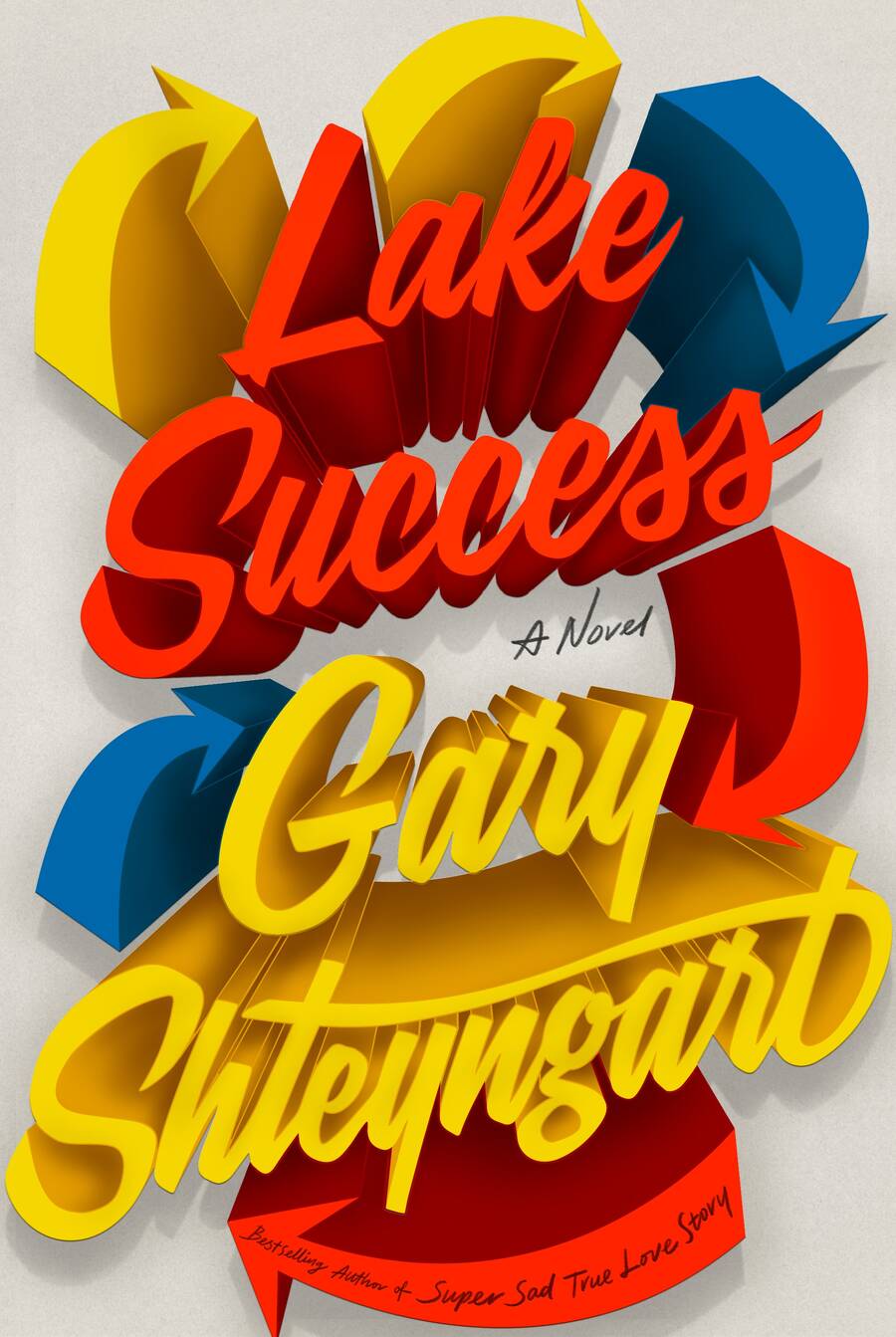 IN SEVERAL INTERVIEWS Gary Shteyngart has given since the 2014 publication of Little Failure—including one I conducted with him earlier this year—he referred to his memoir as the literary version of a fire sale. The book came out after Shteyngart’s first three novels, which featured protagonists whose hilariously and painfully nebbishy lives parodied, to one degree or another, the writer’s own. Vladimir Girshkin (The Russian Debutante’s Handbook, 2002), Misha Vainberg (Absurdistan, 2006), and Lenny Abramov (Super Sad True Love Story, 2010) were all, like the author, men of Soviet Jewish origin who ended up in America following the Cold War-era emigration from the USSR. With jokes reaching beyond punchlines to reveal the pain behind this experience of migration, Shteyngart’s memoir, Little Failure, explored with great honesty the narcissism that went into his earlier mining of his own life.

Lake Success is the first novel to emerge following the recovering memoirist’s blowout, with its tongue-in-cheek implication of a journey from “failure” to “success.” Keeping to his Stakhanovite schedule of writing a national bestseller every four years, Shteyngart introduces us in Lake Success to Barry Cohen, a middle-aged hedge fund manager who grew up on Long Island. Barry is in the midst of a marital crisis and on a solitary journey across America by Greyhound bus, trying to right his life through a questionable attempt to reunite with his college-era girlfriend, a woman who once served as his muse in an errant creative writing class at Princeton, where he majored in business.

It’s the summer of 2016—or, as the book’s narrator puts it, “the first summer of Trump”— and as his protagonist navigates the country, plagued by the persistent stench of the bus bathrooms, Shteyngart offers us a timely exploration of American commonplaces made unfamiliar by summer heat and political strife. Barry describes himself as a “moderate Republican,” defensively staking out a commitment to same-sex marriage as an all-around alibi for his consequence-free, oblivious one-percenter’s position in the economy and society. In Barry, Shteyngart draws a damning portrait of a Never-Trumper—white, male, privileged—who was “even going to bundle for Hillary” but who is ultimately pleased with the stock market rally after Trump’s victory (“markets basically behave like a middle-aged white man,” he notes).

His wife Seema—a Democrat uneasy with her husband’s Republicanism—is a graduate of Yale Law and a native-born child of immigrants from Bengal. A decade and a half younger than Barry, Seema has second thoughts about having become a “fund wife,” though she has also grown accustomed to thinking as one, using the word “diversity” in reference to a preschool she is eyeing for her son Shiva, a three-year-old on the autism spectrum, to mean, “Some of the dads aren’t even hedge-fund guys. They’re just doctors and lawyers.” It is Seema that sets Barry’s journey in motion, criticizing his lack of imagination and turning him out of the house.

Barry’s stunted imagination is one of the main conceits of the book; its tragedy lies, in part, in its protagonist’s unawareness of his own lack of originality. Fittingly, Shteyngart leans into cliché in delightfully meta ways: Barry, for example, fondly and without a trace of self-irony compares his journey to Jack Kerouac’s On the Road. At one point, Barry explains that hedge funds—like the rare watches he collects—must tell a compelling story to attract investors. But this self-proclaimed master of the narrative art fails time and again in his attempts to find protégés on his journey who value (and thus validate) him for this self-perceived skill. These would-be mentees include a former, fired employee of Barry’s imploding hedge fund who only dates women of the same proportions and has furniture designed to perfectly hug their bodies; a crack dealer moonlighting as an extra on a The Wire-inspired tour of Baltimore; and a precocious preteen with a love of maps and trains whom Barry wishes were his own son. In each of them, Barry imagines a supporting character in the redeeming narrative of his own supposed self-discovery.

Only for a nanosecond does Shteyngart—having sustained a novel’s worth of reflections about America without his usual patina of Soviet Jewishness—tease at the characters of his former oeuvre. Toward the end of Lake Success, a woman named Lyuba—who identifies herself to Barry as being of “Israeli and Russian heritage”—appears for a few brief paragraphs. Sporting “a bunch of tattoos in Russian and Hebrew,” Lyuba is a Trump supporter—“[n]ot so much [for] the social stuff, but definitely the simplified tax plan.” In this, Lyuba is similar to Barry, who feels “that he had been brutalized by Seema and her politics.” I gleefully snorted when I encountered Lyuba in the text—such a delightfully familiar Shteyngart character!—but I was glad she was gone as swiftly as she appeared. Shteyngart seems to summon Lyuba as if to caricature his own earlier work and to show his own evolution as a writer.

Yet, there are good reasons to read Lake Success in light of Shteyngart’s earlier fiction. The Russian Debutante’s Handbook, centered on the post-Cold War movement of unfettered markets to the “wild” East, was, in essence, a critique of American-style capitalism through the crooked mirror of a Soviet-born satirist’s vivid imagination. In Lake Success, Shteyngart makes a leap from these exaggerated post-socialist landscapes and plunges us into the brutal reality hidden in plain sight right here in the US of A. Vladimir Girshkin, Shteyngart’s eponymous Russian debutante, may have been a more classically identifiable picaro: a Soviet Jewish immigrant, he headed back to Eastern Europe in the early days of post-Soviet capitalism to take advantage of his fellow American expats. But Barry Cohen is surely Girshkin’s American-born cousin, with similarly few moral qualms about deliberately sinking millions into the stock of a company that defrauds investors seeking to fund medical breakthroughs. Girshkin’s PravaInvest, a pyramid scheme named for its fictional setting in the Prague-like city of Prava, may not be all that different from This Side of Capital, Barry’s hedge fund, named after F. Scott Fitzgerald’s This Side of Paradise, which Barry once read at Princeton.

Shteyngart’s debut protagonists served as guides for his American readers into the topsy-turvy worlds where America’s worship of unrestrained capitalism was crudely exaggerated and located at a safe remove from the nation’s shores. The Trump era has now laid it all bare. The staggering corruption of Trump’s wealthy cabinet members Wilbur Ross and Betsy DeVos, the aspiring mid-level embezzler Scott Pruitt, the perversity of for-profit immigrant prisons gunning for contracts with the Immigration and Customs Enforcement agency, the profanity of foreign-made MAGA merchandise pushed on the underpaid to line Trump’s pockets while stoking rage against anybody who isn’t white—all this, and more, is now our reality. But it feels exaggerated only ever so slightly—as if by a skilled satirist—and reveals that which America has been all along. In Lake Success, Gary Shteyngart—who once wrote of his arrival in the United States in 1979 as preceding “the last twenty years of the American century”—has provocatively retrained his satirist’s pen on our current era. We no longer need to follow flamboyant protagonists into imaginary dystopian worlds; taking a bus ride with perfectly mediocre Barry Cohen into the heart of America’s entirely self-inflicted decline suffices.

Sasha Senderovich is an assistant professor of Slavic, Jewish, and International Studies at the University of Washington, Seattle. His conversation with Gary Shteyngart about Lake Success, part of UW’s 2018 Stroum Lecture series, can be viewed here.

Sasha Senderovich is an assistant professor of Russian, Jewish, and International Studies at the University of Washington, Seattle. With Harriet Murav, he co-translated David Bergelson’s novel Judgment (Northwestern University Press, 2017). He is the author of How the Soviet Jew Was Made (Harvard University Press, 2022).