‘Fauda’ and the Act of Israeli Ventriloquism

The new season of the hit Israeli show Fauda continues in its portrayal of brutish Israelis and cowardly Palestinians. 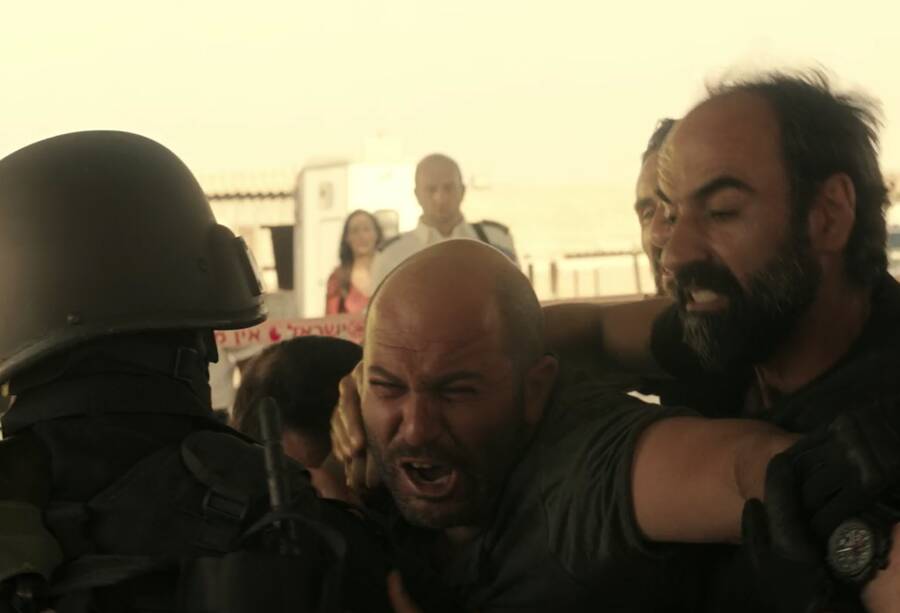 THE FIRST SEASON of the Israeli series Fauda, with its portrayal of an unstoppable, if ethically shaky, elite counter-terrorism unit, left me feeling guilty and slightly angry for having enjoyed it so thoroughly. As I wrote in this magazine: “Fauda is gripping, exciting, and well-made. It also insidiously plays into anti-Palestinian stereotypes. It is very Israeli.” I did not mean that last adjective as a compliment.

The second season, now available for binge-watching on Netflix, left me feeling not only guilt, but a kind of self-loathing, for having stuck through all 12 episodes even once it became clear that its flattening of the conflict into personal vendettas, sexual pathology, and racist denigration of Palestinians was not just an incidental result of its focus on the anti-terrorist unit, but essential to the program. Fauda, in its second season, is clearly not, as its creators have pretended, a humanizing portrayal of Palestinians, but rather is quite clearly aimed at solidifying an Israeli image of them as cowardly beasts who must be dealt with by any means necessary.

The storyline of the second season is as simple as the first: Nidal, known as the mysterious al-Maqdisi, the son of the sheikh leader of Hamas killed in season one, has come to Nablus from Syria—where he was in ISIS—to avenge his father and establish a Palestinian branch of the Islamic State. The elite Israeli unit, its main character the officially retired Doron Kabillio, must stop him. There are other subplots: the (unreciprocated) love of Hamas military commander Walid al-Abed for his wife Shirin, intra-Palestinian disputes, family tensions, and so on.

To be sure, as in season one, we see Palestinians in love, a Palestinian-Israeli romance, a loving Fatah father heartbreakingly betrayed by his ISIS-supporting son, who tearfully repents toward the end. All of this, we have been told by the show’s creators, constitutes an acknowledgment of Palestinian dignity. Rather, it is an acknowledgment of how low the bar is set for an Israeli screenwriter to consider himself “fair.”

A constantly repeated theme in both seasons of Fauda is the cowardice of Palestinians as compared to Israelis. As in the first season, almost every Palestinian fighter, no matter how high-ranking, no matter how militant, blood-thirsty, and uncompromising, immediately informs to the Israelis upon capture, often under the blandishments of brilliant Israeli interrogator Captain Ayoub, possessor of encyclopedic knowledge of the private lives of every militant in the West Bank.

Take, for example, Hamas leader Abu Samara, a man with the power of life or death over hundreds of people, and who has already shown himself willing to work with the Israelis—they know of his affair with an arrested comrade’s wife, which makes him both a killer and a hypocrite—ignominiously scurrying away when the gunfight begins during the climactic final battle. Only the Hamas military commander of the West Bank, Walid, holds out under torture for any amount of time (though he too will ultimately and pointlessly squeal to save himself), but he is notably driven by the demon of jealousy, his wife having left him for the Israeli star of the series, Doron.

Baseness and cowardice abound beneath the red, green, black and white flag. Nurit, the one woman in the Israeli unit, who stoically confronts the worst the unit can inflict, is only shaken by being cornered and groped by angry Palestinians driven into a sexually violent frenzy when an operation goes “fauda,” an Arabic word for “chaos.” The Palestinians are not only killers, they are also predatory deviants.

Israelis, though, are made of sterner stuff. At one point, Doron finds himself strapped to a chair and held at gunpoint by the vengeful al-Maqdisi, with his adolescent son held captive in another room. Still, when ordered to read a statement to the camera prior to his killing, Doron instead throws the note away and proceeds to insult his tormentor’s father, a leader of Hamas who Doron himself was responsible for killing. It is a sign of the limited imagination of the creators of the show that a similar scene played out in the first season, when Doron maintained his disguise as a Palestinian even with a gun to his head. Here there is no disguise—Doron is an Israeli in an orange ISIS prisoner jumpsuit—but the takeaway is the same: he is a hero, willing to die with a curse for the Arabs on his lips, unlike his enemies, who always cave in the end.

Even when they mourn, Israelis mourn differently, more humanly than Arabs. The shiva for the unit’s commander, Mickey Moreno, killed by al-Maqdisi in the season opener, becomes an opportunity for shidduch, when Steve, a member of the unit, discusses his attraction to the sister of the dead man and his desire to sleep with her, unaware that she is standing right behind him (they later sleep together). Creepy, yes, but compared to the steely and heartless reaction of the mother of al-Maqdisi to the death of her other son Samir—her refusal to express any sorrow, her pride in his martyrdom—all bespeak a people enamored of death, while Israelis are lovers of life and of one another. More revolting still is a throwaway moment when word of the ISIS killing of Doron’s father reaches Nablus, and the women dance in celebration of the killing of a Jew. No opportunity is spared to paint the Palestinians as a people defined by their love of death.

Fauda bears more than one resemblance to the greatest of American series, The Wire. Like The Wire, Fauda depicts a unit dedicated exclusively to putting out of commission an evil infesting their territory. The center of Fauda, Doron, who seems to do whatever he wants whenever he wants, is an Israeli McNulty. But while McNulty is eventually transferred, busted in rank and finally driven from the force, Doron acts with total impunity. In Israel, apparently, an intelligence officer can blithely ignore every directive and still be considered a worthy member of the team. Insubordination and even crime in the pursuit of the enemy is not a crime—or even a misdemeanor—in the world of Fauda.

It’s hard to square the vaunted “purity of arms” of the Israeli Defense Forces with a man like Doron Kabillio, who subordinates ethics and morality to personal motives. Doron, played by series co-author Lior Raz, is a providential figure, one who is right even when he does wrong simply because he is effective. Though his colleagues worry he has turned the unit into an arm of his own personal revenge fantasies, they remain loyal to him.

As we see throughout the two seasons of Fauda, this purity of arms is a fraud, as is the supposed nobility of Israeli intentions. The unit, disguised as Arabs, seizes Hamas military commander Walid while he is being transported to prison after refusing to break under questioning. A guard—an Israeli guard—is wounded in the action, the prisoner is kidnapped, tortured, killed, and dumped in a lot, and the entire episode passes unremarked by the Israeli military leadership. Not a word of reproach for these rogues, these murderers. But given the way the Palestinians are depicted, their murderousness, their cowardice, their backwardness, their overflowing hatred of the Jews (occasionally the “Zionist Jews,” but usually just the “Jews”), this brutality is almost unremarkable: how else do you treat these people who refuse to accept their fate as a defeated people?

The resistance and hatred of the Palestinians onscreen are inexplicable, or at least unexplained, in Fauda. The prospective terrorists easily circumvent the checkpoints by pretending to be Israeli (a mirror of the Israeli unit’s ability to, chameleon-like, appear to be Palestinians by simply speaking Arabic and donning shabbier clothes), no one waits on long lines to cross between the West Bank and Israel. When Israelis kill, it is fighters they kill, or prisoners, or people attacking armed Israelis—all, by definition, “bad people.” Soldiers aren’t seen patrolling the streets, no one has their house destroyed. There is no room in Fauda for something like the recent killing of volunteer medic Razan al-Najjar, shot by the Israeli army while assisting the wounded at a demonstration in Gaza.

The “good” Palestinian of the show is Abu Maher, the Palestinian Authority’s security chief in Nablus who collaborates actively with the Israelis. Eventually, he takes his son, whom he correctly suspects is in cahoots with al-Maqdisi and ISIS, into Israel for coffee and, against a backdrop of Israeli skyscrapers, tells him to face facts: those building will never go away. But this reasonable remark fails to lead to a reasonable conversation and alternative. Palestinians are offered the possibilities of either collaboration or killing. Perhaps if the series had Palestinian input in its writing process an alternative might have been offered. Instead, Fauda is nothing but an an act of Israeli ventriloquism.