Don’t Call It an Anniversary

One year after the Tree of Life attack, the Jewish community of Pittsburgh is still trying to make sense of what happened. 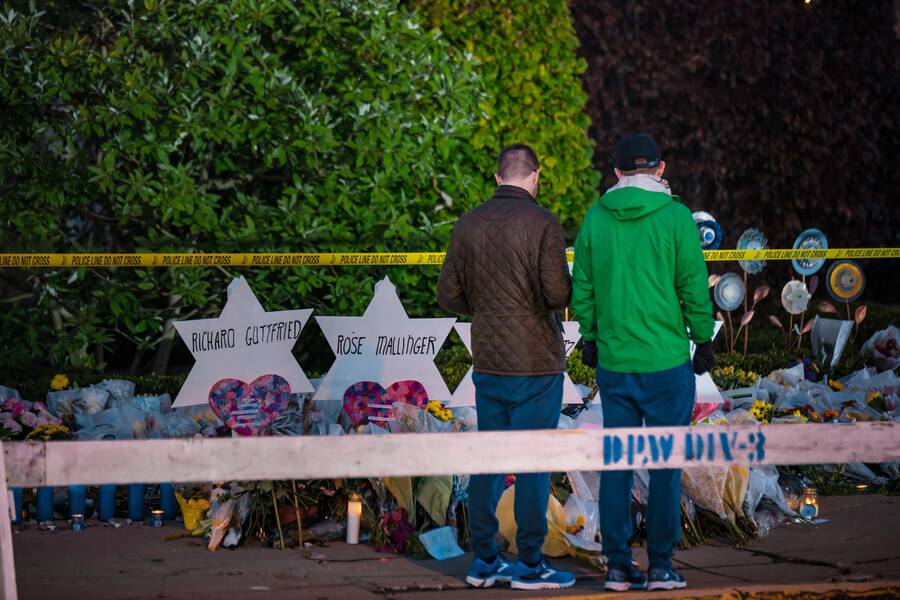 Passersby pay their respects to the victims of the shooting at the memorial outside of the Tree of Life synagogue in Pittsburgh, October 30th, 2018. Photo: Brendt A. Petersen via Shutterstock
Tweet Copy Link Email Print

IT WAS COLD AND DAMP in Pittsburgh on October 28th, 2018. The previous day, a white supremacist named Robert Bowers, motivated by HIAS’s efforts to welcome refugees to the United States, walked into the Tree of Life synagogue in the heavily Jewish neighborhood of Squirrel Hill and killed 11 people. A year later, the weather is what sticks in my mind, the feeling of standing next to my wife outside Tree of Life the morning after the massacre. We had never been inside—had never attended a service at Tree of Life, New Light, or Dor Hadash, the three congregations that use the space—but we’d been past the building countless times. She cried, but I couldn’t find the tears. We’re still not sure how to fully process the attack.

We’re not alone. A year on, the Jewish community of Pittsburgh is still trying to figure out how to make sense of what happened.  Even among the people most directly affected by the shooting, responses vary widely. “It can’t happen here,” says Stephen Cohen, co-president of New Light, about the initial response to the attacks. “I think the first reaction everyone had was: ‘Pittsburgh? Squirrel Hill?’”

But Ellen Surloff, former president of Dor Hadash, has a different perspective: “By October 27th, we had so many mass murders in this country; for anyone anywhere to believe ‘it can’t happen here,’ is naive.”

Even the language used to describe the commemoration of the attack is fraught. “We don’t like to use the word ‘anniversary’ because of its celebratory implications,” says Barb Feige, executive director of the Tree of Life congregation. Instead of words like “tragedy” or “event,” many people here prefer to use terms like “attack” and “shooting”—words that refuse to allow the speaker to minimize or sugarcoat what happened, that force you to stare the crime in the face.

“The process of healing after an attack like this varies from person to person, from week to week, from day to day, and sometimes from hour to hour,” says Dr. Jordan Golin of Jewish Family and Community Services, an organization focused on helping the Jewish community heal in the wake of the tragedy. Several other organizations—including but not limited to the Jewish Community Center, the Center for Victims, the 10.27 Healing Partnership, and the Jewish Federation of Pittsburgh—have stepped up to help the broader Pittsburgh Jewish community process its trauma.

“One of the things that we’ve noticed the past few weeks is that people who were doing better in general are starting to struggle again,” Golin told reporters in the lead-up to the High Holy Days. “[There’s] a sense of guilt that a lot of people in our community are experiencing, guilt that I’m not feeling better yet, guilt that I’m having symptoms at all even though I didn’t necessarily know anybody who was killed that day. Guilt just seems to be pervasive.”

Of course, no one feels this trauma more viscerally than the survivors of the shootings themselves. “It’s not like grief, that you can recover from and make peace with,” says Rabbi Jonathan Perlman of New Light, a survivor of the attack. “Trauma is something that is ready to attack you at any moment of the day.”

It’s a trauma that was a long time in the making. Antisemitism was a problem in the US long before Donald Trump, but his election has emboldened the far right, and antisemitic attacks have risen both in the US and worldwide in its wake. “You cannot encourage the far-right without encouraging antisemitic violence,” says Talia Lavin, a Jewish journalist working on a book about the growth of online white supremacism. “You cannot decouple those things.”

Robert Bowers appears to have started as a garden-variety anti-government conservative before his views metastasized into something far darker. This isn’t unusual; Bowers didn’t exist in a vacuum, nor is he remotely alone. There’s a straight line from the fetid right-wing internet swamps of 8chan, Gab, and for that matter Twitter, to horrific events like Charlottesville’s infamous Unite the Right rally, the Pittsburgh shooting, and the synagogue massacre in Poway, California a few months later. “Monitoring the far-right, I read more vehement messages than Bowers’ posts every day,” says Lavin.

Much of the Pittsburgh Jewish community understands that the far right is the true threat, as evidenced by the thousands who turned out in protest of Trump’s visit to the city in the wake of the attack. But there are also some who perceive an equal or greater threat on the left. The most vocal exponent of this view has been New York Times opinion editor and writer Bari Weiss, a Pittsburgh native who was bat mitzvah’d at Tree of Life. In her recent book, How to Fight Anti-Semitism, which opens with her own recollections of the attack, Weiss argues: “Because of the way it can be smuggled into the mainstream and manipulate us, anti-Semitism that originates on the political left is more insidious and perhaps more existentially dangerous” than the lethal antisemitism of the right that struck her own community—a view she has repeatedly defended in public appearances while promoting the book.

For the past year, Weiss has been easily the most influential voice of Squirrel Hill’s Jewish community in the mainstream media. But her deflection to left antisemitism is a hard sell in a city still reeling from right-wing violence. Certainly, many of the people most directly affected by the Tree of Life attack aren’t willing to wade into the subject of politics (some even visibly bristled when I raised the subject). Others, though, take issue with Weiss’s insistence on holding the left partly accountable for the massacre. “I think even talking about the left at the same time we’re talking about white supremacists with assault rifles is just such a false equivalence,” says Surloff. “But Bari’s going one step further: she’s not just saying they’re similar, she’s saying the left is worse, and nothing could be further from the truth. A white supremacist from the right walked into Tree of Life synagogue and murdered people. This has nothing to do with the left.”

Arielle Cohen, a former co-chair of the Pittsburgh chapter of the Democratic Socialists of America who was in the city organizing with IfNotNow at the time of the attacks, echoed this sentiment: “White nationalism is what mobilized the shooter at the Tree of Life Synagogue last fall,” she says. “Bari Weiss is not interested in collective liberation, but rather a politics that’s antagonistic to collectivism and solidarity. This is why she has identified the left as a threat.”

In the midst of this resurgent pain surrounding the one-year mark of the attack, Trump visited Pittsburgh on Wednesday, October 23rd, though it’s unclear if he was aware of the significance of the date—officially,the purpose of his visit was to speak at the Shale Insight conference in support of fracking. Once again, Jews came out in protest, disrupting Trump’s speech to the conference hall. Fourteen protesters were arrested.

“The gunman who entered the synagogue a year ago was driven by fear and lies to kill Jewish people and stop new immigrants—but he didn’t invent these lies. He heard them from the mouth of this president and the white nationalists this president and his party have emboldened and enabled,” says Dove Kent, senior strategist at Bend the Arc, the progressive advocacy group which organized the action. Though this action was smaller than the one against Trump’s visit to the city a year ago, the message was the same: the president’s stoking of the far right makes his presence at the site of an antisemitic massacre deeply insulting to the Jews of Pittsburgh.

C.A. Pinkham is a Pittsburgh-based writer whose work has appeared in Jezebel and Thrillist.