With a Nod to ’68, Columbia Grad Students Strike

Fifty years after the student occupation, Columbia’s graduate union goes to the picket line in its fight for recognition. 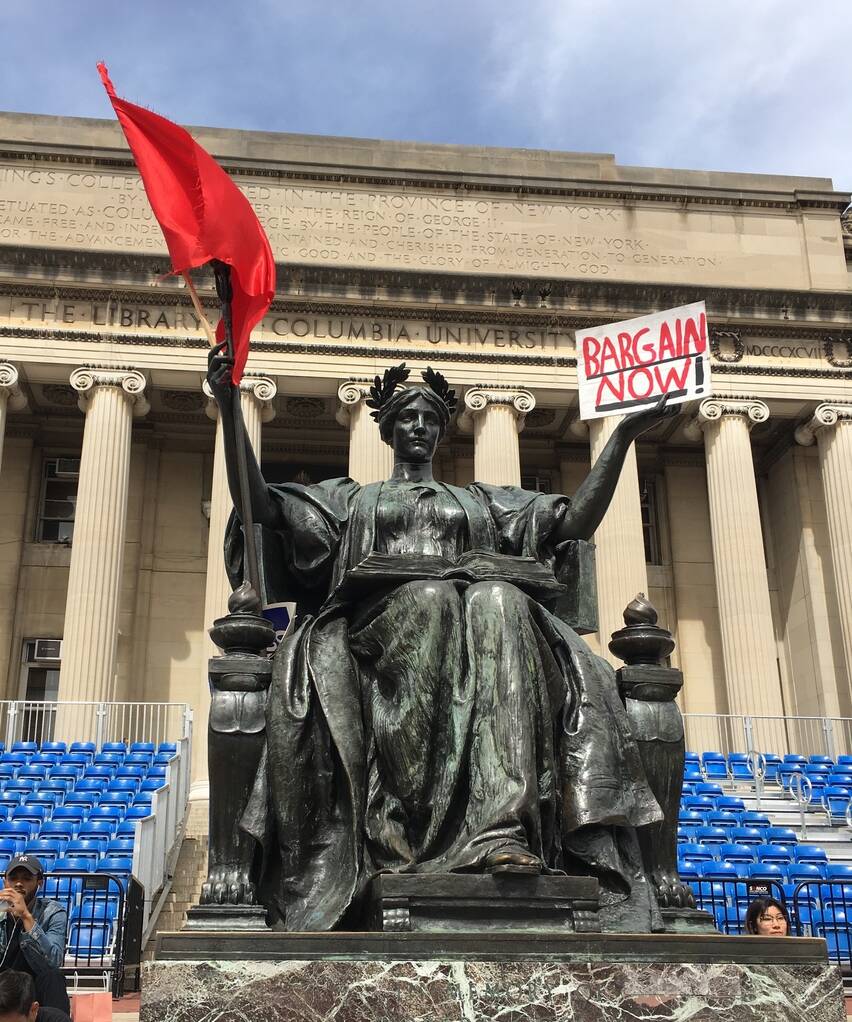 AS OF TUESDAY, April 24th, the graduate workers of Columbia University, or GWC-UAW, are on strike. Out of a union membership of around 3,300 people, 1,968 voted on whether to authorize the strike, with 93% of those voting in favor. It’s a symbolically charged number: the work action, which will last through April 30th, overlaps almost exactly with the student occupation of Columbia 50 years ago, in 1968.

The anniversary of the 1968 occupation, which was led by Students for a Democratic Society (SDS) and the Student Afro-American Society, wasn’t lost on some of the 2018 strike participants. One graduate student from the Department of Earth and Environmental Sciences walked the picket line Tuesday morning holding a sign that read “1968-2018, The Struggle Continues.” Highlighting the continuity between 1968 and today, he said, shows that “Columbia hasn’t always been the progressive beacon it pretends to be.”

Fifty years ago—a high point of protests against both the Vietnam War and institutionalized racism—the students’ main grievances with the administration were about its links to the military and its plans to build a segregated gym near campus. As Mark Rudd, then-president of Columbia’s SDS chapter, wrote on Monday in The New York Times, the gym “would have segregated the (mostly white) students from the (mostly black) local residents” who would have had access—via a separate entrance—to a separate floor of the facilities. In response, the students took over university buildings, and, at one point, held a dean hostage in his office for 24 hours (after which he was let go, “showing no sign that he had been unsettled by the experience,” according to The New York Times).

But there were other issues motivating those activists too. As Rudd describes the precursor to the occupation: “For years…we fought racism on campus in the form of the university’s refusal to allow mostly black and Latino cafeteria workers to organize a union.” While a lot has changed in the 50 years since the occupation, Columbia’s intransigence in the face of unions remains.

Well before their graduate workers voted on whether to unionize, the administration hired anti-union law firm Proskauer Rose LLP, also hired by Duke University to quash its own graduate student organizing drive, to represent Columbia. Despite efforts on the university’s part to prevent graduate students from choosing to affiliate with the United Auto Workers (UAW), the union won a National Labor Relations Board (NLRB) election with 72% of the vote in December of 2016, only months after the NLRB set a new precedent, overturning a 2004 decision, by ruling that graduate students employed as either teaching or research assistants have the right to collectively bargain. In response, Columbia’s administration filed a series of objections, all of which were rejected by the NLRB. In December of 2017, the NLRB certified the GWC-UAW and asked Columbia to begin bargaining with the union. Yet the administration continues to stall. As Joe Richard, the lead organizer for Rutgers AAUP-AFT, said when asked about the administration’s 50-year-plus animus toward unions, “The administration always seems to be on the wrong side of history.”

FOR ITS PART, the UAW describes the Columbia administration’s refusal to recognize the union as illegal. “There’s no question that they are breaking the law when they refuse to bargain,” said UAW regional director Julie Kushner in an interview with Bloomberg News. The reasoning for the stonewalling is simple, according to many GWC-UAW members. By refusing to recognize the union in violation of the law, the administration hopes to push GWC-UAW to file an unfair labor practices complaint with the NLRB, which would then allow the university to argue in federal court that GWC-UAW members are students, not workers. In doing so, the administration hopes to force the case up to what will by then be a Trump-appointed NLRB, which would likely overturn its 2016 ruling. This would jeopardize the status of all private university graduate unions, such as the one graduate students at Harvard won last week.

Despite issuing public statements of opposition to the Trump administration, in practice, Columbia’s administration is leaning hard on Trump to undermine the union. This effort, as with many anti-union campaigns, isn’t about money alone. “The administration doesn’t want to cede power,” said Anayvelyse Allen-Mossman, a graduate student in the Department of Latin American and Iberian Studies.

Yet GWC-UAW seems to have momentum, which is remarkable for a campaign that began in January 2014, if not earlier. The administration, as with any employer resisting unionization, hopes to weaken GWC-UAW through inertia by preventing it from achieving bargaining priorities such as higher pay, greater support for graduate workers with families, and a grievance process for sexual harassment. Call it a war of attrition: by slowing GWC-UAW down in its aim to better its membership’s working conditions, Columbia seeks to peel off support for the union. But this strategy isn’t working. More graduate students voted to authorize the strike this month than had originally voted in favor of a union; in other words, the GWC-UAW has an engaged membership willing to fight for its demands.

In addition to this mandate for action from GWC-UAW members, a number of high-profile supporters have voiced their support for the union. MSNBC host Chris Hayes canceled a scheduled appearance on campus Tuesday so as not to cross the picket line, and Chelsea Clinton—who currently teaches at Columbia’s Mailman School of Public Health—added her name to to a letter calling on university president Lee Bollinger to bargain with GWC-UAW. By the latest count, 273 faculty members have added their names to the letter.

Meanwhile, allies from other unions, on and off campus, as well as undergraduates and faculty, were all visible on the picket line and during the Tuesday rallies. “We organized a teach-in for undergraduates on Monday night and more than 75 undergraduates showed up,” said Meghan Brophy, a Barnard sophomore and member of Student-Worker Solidarity, an undergraduate organization that works with GWC-UAW. Brophy marched on the picket line Tuesday morning along with other undergraduates, and argued that the by now well-worn line in education sector labor struggles—that workers’ “teaching conditions are students’ learning conditions”—rings true for many of her peers. Liza Featherstone, an adjunct professor in the School of International and Public Affairs, canceled her Tuesday morning class to join the picket along with other faculty members. “The university has dragged its feet disgracefully in recognizing the union, which was democratically voted on by the graduate students,” she said, when asked why she was supporting the strike, adding that if the administration continues to refuse to bargain in good faith, “the grad students should shut this campus down.”

While adjuncts at Columbia are not unionized, other unionized workers on campus and from nearby worksites made their support for GWC-UAW known. When building trades members from a local jobsite arrived at an afternoon rally on campus Tuesday, GWC-UAW members broke out in applause and chants. When asked why he supported GWC-UAW, a representative from the Ironworkers’ district council replied that GWC-UAW members had supported him and his fellow workers in a fight against a non-union contractor with a record of exploiting workers in a development project at the nearby Jewish Theological Seminary. “The trades unions support the students because the students supported us.”

MEMBERS OF 1199SEIU, which represents hundreds of Columbia workers, were present to support the strike as well, and multiple GWC-UAW members mentioned the administration’s ongoing refusal to “meaningfully bargain,” as Anayvelyse Allen-Mossman put it, with eight 1199SEIU members who voted to unionize with SEIU in 2016. The “Columbia 8” are clinic workers on campus who nearly two years later have yet to win a contract. As Brophy described it, when the union enters a bargaining session, the administration “walks out” of the meeting. All eight of the workers are women of color, and as the union describes it, one of their main fights is for their contract to include a provision to safeguard against workplace sexual harassment. “Given our current reckoning about the prevalence of sexual violence and misconduct across industries, we find Columbia’s resistance to a sexual harassment provision very troubling!” reads the union’s website.

But with Harvard graduate employees winning their own union election last week, and teachers’ strikes spreading across the country, there’s a possibility that the tide is finally turning in GWC-UAW’s favor. According to Ben Serby, a PhD student in the history department who carried a sign referencing the recent teachers’ strikes in West Virginia and Oklahoma, while Columbia University may be a private institution, his fight and that of public sector teachers is not so different. “We’re reaching a crisis point in this country,” he told me, pointing to the country’s meager unionization rate. And “because of that, we’re seeing cutbacks to social services, like education, across the country.” For Serby, this week’s strike was about challenging that pattern, which amounts to “the rearticulation of education not as a public good, but as a commodity.”

Richard, the Rutgers organizer, agreed. He spent Tuesday on the picket line as a show of “support and solidarity” with GWC-UAW, adding that he sees the union’s willingness to strike as evidence that teachers’ strikes elsewhere in the country have injected a “renewed confidence” in strikes as a weapon for unions in higher education. “That sense of confidence is potentially infectious,” he told me before being called to the megaphone to give a talk on the subject of a teach-in, one of many organized by GWC-UAW as part of the week’s actions.

This current job action will end on April 30th, the result of a compromise between members who sought a traditional, open-ended strike, and those who remain afraid of retaliation and thus weren’t willing to endorse such a tactic. However, many members spoke of the action as part of ongoing political education for Columbia’s graduate workers, and allowed for the possibility of such a strike in the future. “It’s a training, since Columbia may not come to the bargaining table,” said civil engineering PhD student Olga Brudastova, before adding, “We’re excited to follow in the footsteps of 1968.”

Alex Press is a staff writer at Jacobin. Her writing has appeared in The Washington Post, The Nation, Vox, and n+1, among other places.

Report
Amazon Workers Say Warehouse Health Precautions Are Insufficient
A recent survey of hundreds of Amazon warehouse employees gives new insight into the conditions that are prompting worker revolt.
Alex Press
Report
From the Ashes of the Old
Can DSA transform the labor movement?
Alex Press
Sign up for our email newsletter, featuring exclusive original content