The shape of the mayoral race reveals the limits of the electoral power the left has built in the city since 2018. 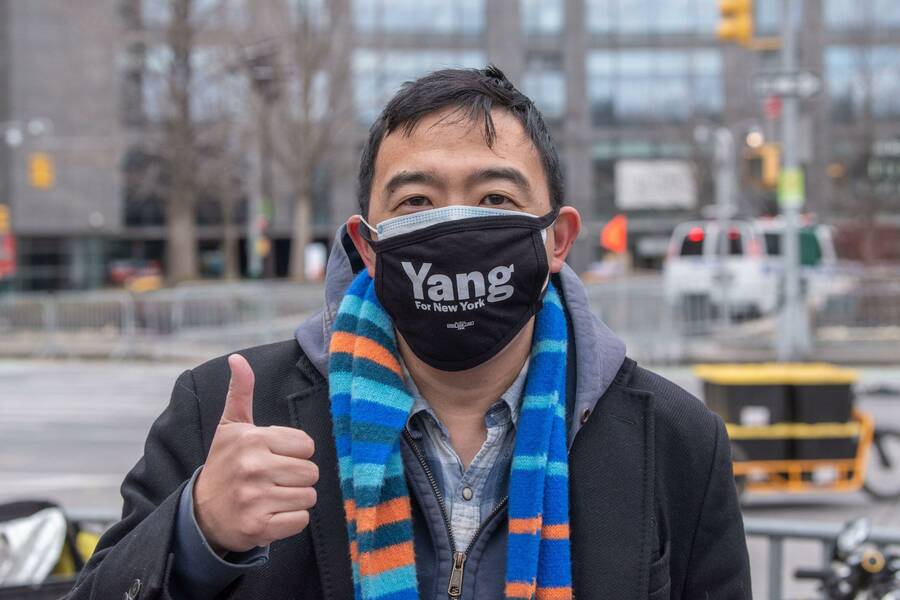 SINCE ALEXANDRIA OCASIO-CORTEZ ousted Joe Crowley in the June 2018 congressional Democratic primary, New York’s progressives have been steadily accruing electoral power. Several months later, a cohort of left-leaning candidates, backed by the Working Families Party (WFP), unseated a group of Democratic state legislators who had caucused with Republicans in Albany, while Julia Salazar, a member of the Democratic Socialists of America (DSA), defeated eight-term-incumbent Martin Dilan in a race for a State Senate seat in Brooklyn. Last June, Jamaal Bowman—who had the support of the progressive political action committee Justice Democrats and an endorsement from DSA—successfully challenged 16-term-incumbent Eliot Engel in the congressional primary, and five DSA-backed candidates won nomination for seats in the state legislature. Today, the socialist contingent in Albany is the largest since 1919.

Yet with fewer than ten weeks before the Democratic primary that will almost certainly determine New York’s next mayor, the city’s progressive forces have failed to rally behind a single candidate. The three candidates vying for left-leaning voters—Scott Stringer, Maya Wiley, and Dianne Morales—are all polling in the single digits, despite evidence that New Yorkers would prefer a mayor who supports cutting funding for police and raising taxes on the wealthy. Celebrity venture capitalist and former presidential candidate Andrew Yang currently leads the pack, with Brooklyn borough president Eric Adams, a Black former police officer and erstwhile Republican, in second place.

There is no single reason why New York progressives now find themselves contemplating the possibility of a Yang victory in the primary. The pandemic has exacted a terrible toll on the essential workers who give organized labor in New York its electoral heft. Progressives are struggling to overcome voters’ disillusionment with the outgoing mayor’s unrealized promises to combat racial and economic inequality—what one activist called “the de Blasio hangover.” And organizers describe feeling pulled in too many directions and prioritizing crisis response over electoral work. “People are tired and distracted,” said Gabe Tobias, a former Justice Democrats advisor and manager of Our City, a new progressive PAC that is launching an effort to challenge Yang’s campaign. “I really hope that in these next two months, there’s a concerted effort by progressive groups to make clear how important this is.”

The fact that many progressives describe feeling a “sense of disappointment” at the left’s mayoral chances reflects how much the political landscape has shifted in less than a decade. Yet it is not only the pandemic that has stymied progressive efforts. In congressional and state legislative races, where voter turnout is in the low tens of thousands, candidates backed by progressive groups like Justice Democrats and DSA have been able to compete with better-funded, establishment Democrats. But electing the top executive in a city of roughly 5 million eligible voters requires the ability to operate at a very different scale. “We don’t have the capacity for that yet,” said Susan Kang, a professor of political science and a member of the steering committee of the New York City chapter of DSA. While the organization will release a voter guide for the mayoral election, its efforts are primarily focused on six city council races. “The power we’ve built, we’re proud of it,” said Bianca Cunningham, former co-chair of NYC-DSA and a co-founder of DSA’s AfroSocialists and Socialists of Color Caucus. “But we’re also really sober about the lack of power and infrastructure that we would need to have to support a city-wide mayoral race.”

The conditions of the pandemic have made it especially difficult to build the left’s organizational capacity. “Our organizations and our members have spent the year prioritizing mutual aid, bailing people out of jail, fighting for unhoused New Yorkers and excluded workers, and just doing our best to keep ourselves and our families alive,” said Rachel McCullough, political director of The Jewish Vote, a sister organization of Jews for Racial and Economic Justice (JFREJ). Several progressive organizers spoke of the challenge of campaigning without putting volunteers and activists at risk of catching Covid-19. Yang is the only candidate who has been campaigning in person from the start, making frequent appearances across much of the city to appeal to a range of constituencies—for example, visiting factories in Queens, touring Hasidic Brooklyn, and recording a music video with Chinese American rapper MC Jin. (In early February, he caught the coronavirus and briefly suspended in-person activity.)

The end of the de Blasio administration has also provided progressives with a chance to reflect on the disappointments of his tenure and the limits of the executive office—a stark reminder that a candidate who campaigns as a progressive may not govern as one. De Blasio’s 2013 bid for office was buoyed by the energies of Occupy Wall Street: He launched his campaign with a pledge to combat inequality and reform the NYPD, deploying his multiracial family front and center as evidence of his commitment. Yet de Blasio fell far short of progressives’ hopes. In a report for the Community Service Society of New York, housing policy analyst Sam Stein found that despite de Blasio’s pledge to increase the availability of affordable housing, “by some key metrics, the housing affordability crisis has worsened over the past seven years”; homelessness, for instance, increased during de Blasio’s years in office. The outgoing mayor’s record on policing is no better. In the wake of Eric Garner’s killing in 2014, and more recently during the George Floyd protests, de Blasio defended the conduct of NYPD officers despite videos documenting police violence and brutality.

“After de Blasio, we have no illusions about a ‘progressive’ mayor delivering the kind of transformative change our city needs,” McCullough acknowledged. But she contended that this realism need not undercut progressive energy at the polls. “When we endorse someone for mayor, we aren’t choosing our savior—we’re choosing our target,” she said, arguing that voters should still engage with the effort to elect the candidate who will be most receptive to activist pressure. However, unlike during the 2020 presidential elections, when organizers used a similar refrain to urge frustrated progressives to campaign for Joe Biden, the mayoral election contains no Trump-like adversary to spur people to act. On the contrary, while engaged progressives view Yang as the candidate of big money and big tech, some voters who are following the race less closely seem to interpret his playful affect as a proxy for progressivism. “Many [Yang] backers I spoke to view him as progressive,” Michelle Goldberg wrote this month in The New York Times, “particularly those who associate him with the call for a universal basic income, which animated his presidential campaign.”

With the June 22nd primary fast approaching, left-leaning groups, including The Jewish Vote, are working behind the scenes to align on how to prevent a Yang victory. Though the race has no shortage of candidates claiming the progressive mantle, none has emerged as a clear standard-bearer. Dianne Morales, an Afro-Latina former nonprofit executive, has staked out the leftmost policy positions, particularly on issues of housing and policing—but despite support from some DSA members, a recent poll found that fewer than one-in-three voters had heard of her. City Comptroller Scott Stringer boasts endorsements from several left-wing elected officials, including Bowman and Salazar, as well as support from an array of labor unions—but he is a white man over 60 at a time of heightened sensitivity to representation. (In an interview with the Times, Stringer said of himself: “If I was a book, and you’re in a bookstore and you saw the cover of the book, you may say, ‘I’m not sure I want to read that.’”) Former counsel to Bill de Blasio and MSNBC contributor Maya Wiley, who is Black, initially struggled to get her campaign off the ground, though she recently won the endorsement of the major healthcare workers union 1199.

Building late-stage momentum behind any of these candidates will require leveraging the city’s newly instituted ranked-choice voting system. Many progressives celebrated the adoption of this change in 2019 under the belief that it could free voters to support left-wing candidates without fearing that they were wasting their ballots. But now it seems more likely that ranked-choice voting could tilt the outcome of this year’s mayoral race in the other direction. Yang, who enjoys far greater name recognition than any of his competitors, seems poised to garner the lion’s share of second-choice votes, which could usher him into office even if he fails to win most first-choice votes outright.

“Yang has the clearest path to victory, and a Yang administration would be disastrous for our communities,” McCullough said. “A unity ticket is the only way to rally the movement.” To maximize their chances under the new system, prominent progressive groups are announcing endorsements of multiple candidates, assembling a progressive slate: In most cases, some combination of Morales, Wiley, and Stringer. On Tuesday night, the WFP announced its endorsement of Scott Stringer for its first-place choice, followed by Morales in second and Wiley in third. JFREJ is currently conducting a poll of its membership before announcing its endorsements. The goal of providing three endorsements, explained WFP State Director Sochie Nnaemeka in a statement, is “to avoid a corporate-backed candidate from seizing power in City Hall.”

Whether or not progressives manage to prevent a Yang victory, they are hoping to use this cycle to build an electoral infrastructure strong enough to support a successful progressive mayoral bid in the years ahead—and to act as a check on whoever becomes the city’s next mayor in the meantime. A new organization called Road to Justice NYC—a coalition of the 1199 union, immigrants’ rights group Make the Road, and the racial justice nonprofit Community Voices Heard Power—has endorsed 17 candidates running in city council races. The New York DSA chapter is also campaigning intensively for its six candidates for city council. “We can’t just elect a great mayor,” said Tobias, of Our City. “We also need this activist block in city council, so that when they don’t like what the mayor is doing, they’re going to stand up to it.”