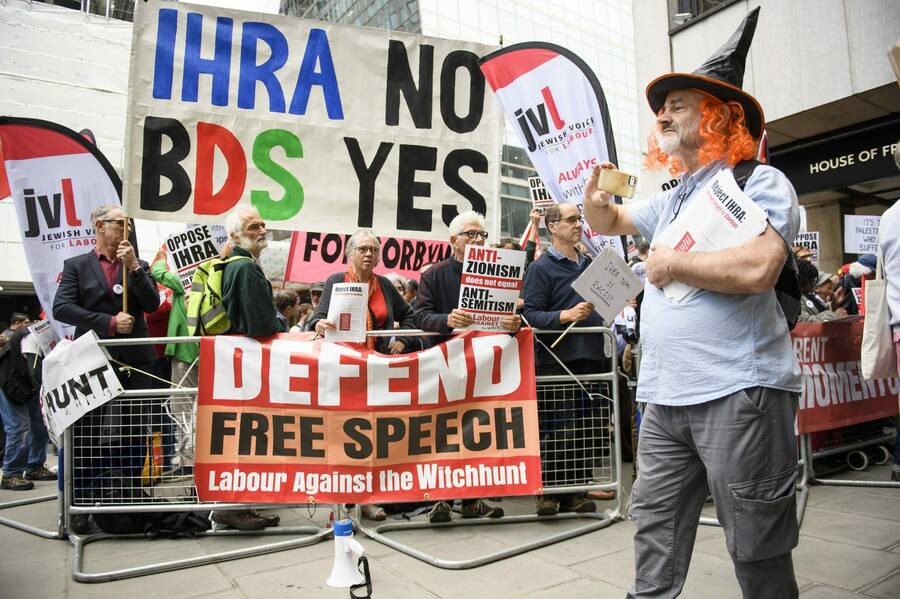 Recently I spoke with David Renton, a British socialist and historian who is the author of the newly published book Labour’s Antisemitism Crisis: What the Left Got Wrong and How We Can Learn From It. We discussed the British Labour Party under the leadership of Jeremy Corbyn, who was ousted last year following dismal election results in 2019 and ongoing controversies surrounding alleged antisemitism within the party ranks (a topic Joshua Leifer covered for Jewish Currents last November), which have been exploited by the British right to great political benefit. Our conversation has been condensed and edited. It originally appeared in yesterday’s email newsletter, to which you can subscribe here.

Shane Burley: It’s often said that antisemitism is a sign of political sophistication among racists on the right, but that seems less true about antisemitism on the left. Why is that?

David Renton: When you see antisemitism on the left, it’s a sign of our lack of sophistication. It tells you that people are letting ideas in from outside, and those ideas are corroding their leftism.

Jeremy Corbyn led Labour between 2015 and 2020. During that period, we had an insurgent left that did provide some examples of antisemitism, including some depressingly close to the top of Labour leadership. Most socialists in Britain will tell you that the criticism was exaggerated by the center and the right to police the far left. That’s partly true, but it ignores real incidents that gave the right an opportunity to attack us. My main argument to audiences on the left is to encourage people to stop antisemitism in our ranks, because it makes it harder for us to win and easier for the right to win.

SB: What are the roots of antisemitism in the Labour Party?

DR: I argue that it began with the populist surge of the past few years. In 2016, with Donald Trump’s victory and Brexit, both the US and the UK saw attacks on neoliberalism by right-wing populism, with its emphasis on nationalism and closing the economy. In many countries, the shift from neoliberalism to populism increased space for antisemitism. In the United States, between about 1976 and 2015, antisemitism was hammered when it appeared on the political right. There was no one less relevant than a Nazi, because the right’s project—capital moving freely, internationalization, relatively open borders—did not align well with antisemitic ideas or conspiracy theories. But right-wing populism posits a different way to run an economy, as a series of national fortresses, while breaking up the international blocs (the International Monetary Fund, the World Bank, the European Union) that were seen as the right’s enemies. This created space for antisemitism.

Once antisemitism has been revived, lots of people can pick it up, including those who see themselves as enemies of the populist right. They might be antiwar activists who idealize the dictatorship in Syria, or they might support forms of Black separatism. But if they’re getting their news online, where antisemitism is more pervasive, it can start to define them.

Sometimes these ideas started in the American far right and migrated into British left-wing circles without people having any idea where they began. For example, the American neo-Nazi website The Daily Stormer decided to go after a Jewish MP, Luciana Berger. She was getting all these hate messages, sometimes thousands of them a day. Because she opposed Corbyn, she also started getting an enormous amount of hate messages coming from the left. Some people with long histories on the left started attacking her using plainly antisemitic language, saying things like “Netanyahu is your Prime Minister,” or “I hate Jewish people,” without even coding it.

This is a process that plays out on the left repeatedly. In my book I give examples like the website AntiWar.com, which gets picked up in the British left-wing antiwar movement because it’s such a high-profile source of information about Iraq, and some of the people who write for it are on the left, but its founders come from the libertarian right. There are a lot of these radical right-wing figures who get shared by the left based on their positions on individual issues.

Antisemitism is capable of appearing anywhere on the political spectrum. The left in Britain had very few guards against it. We weren’t expecting it to happen, and when it did, many people’s response was to get defensive and to deny the obvious.

SB: How can the left reclaim a position against antisemitism after it has been so tarnished by cynical right-wing accusations?

DR: We need to be principled and vocal when we see antisemitism—to be clear about problems when they happen, to put them up for public discussion, and to acknowledge when people close to us are in the wrong.

DR: After every alleged incident, Corbyn ended up looking surly and defensive. Corbyn is normally such a wonderful individual, kind and empathetic and capable of immense and obvious acts of generosity and empathy. For example, when the Finsbury Park Mosque in London was attacked in 2017, within two hours he was at the scene meeting and hugging the survivors. When it came to Islamophobia, he was so much more sophisticated than every journalist in Britain. But when it came to antisemitism, anytime he was interviewed he would look grumpy, say, essentially, yes this disturbs me and we’re investigating it, but it’s not up to me, it’s a collective decision. He came across as having no emotional intelligence on the issue at all.

But I don’t see this as only a problem for the Labour Party. Fighting antisemitism is a wider responsibility for the left outside Labour, including people ideologically closer to me. This is especially important if we think about the possibility of the far left pulling the center left in our direction, the way the far right has been leading the center right in Britain. Antisemitism often comes into the left via people who are angry and dissatisfied and looking for answers—in other words, in spaces where the far left has a relatively large presence, and the center left is relatively weaker.

One of the best examples came in 2018 when the MP I mentioned, Lucianna Berger, asked Corbyn about his support for an American artist, Mear One, who had painted a street mural in London that was then painted over back in 2012. Corbyn posted a message of support for the artist on Facebook, which became a huge story because if you look at the mural for any length of time, it clearly includes antisemitic imagery. It shows the world as a series of black bodies dominated by white financiers with hooked noses.

But who is Mear One? He isn’t a Nazi. In the 1980s, he worked with any number of hip-hop artists in LA, and he’s devoted hundreds of hours to antiwar campaigning. Ask him about the mural, and he will swear that it’s part of his lifelong cultural politics. He says that it was his best attempt to turn the politics of the Occupy movement into art. So there’s an extra duty on the far left to monitor our boundaries for antisemitic ideas.

SB: One of the fears about populism is that rhetoric that pits “the people” against “the elite” will always dovetail with antisemitic theories and cultural images. At the same time, populism offers average people a way to engage with questions of inequality and powerlessness. Do we need some degree of left populism if we want to make real gains?

DR: When the Labour Party was embracing populism in 2017, Corbyn was doing relatively well. He gave a series of deliberately left populist speeches, and some of the people who were attracted to the Labour Party during that time ended up behaving terribly in pro-Corbyn online spaces. You’re kind of right: Corbyn couldn’t win an election without broadening Labour’s appeal, but by broadening the party, he risked letting in some people who are attracted to apolitical populism, and also to conspiracy theories.

I see two things Labour could have done differently. First, Corbyn could have opened up space by turning not toward populist politics, but toward class politics. His speeches would go back between populist rhetoric and class war, and the class war speeches were really good. For example, he would often go after the press and talk specifically about who owns them and why they control who has access to the media. And then there were speeches that were fuzzier, where he would talk about “the elite” and it wasn’t obvious who they were from his speech.

And the second thing, and this is tough, is education. All the large social democratic parties in Europe rely on social institutions that can help train people in left-wing values—like a labor union or a tenant union, for example. But all of these have atrophied under neoliberalism. So we have to create other ways of developing education, especially online, that can engage people in deeper political analysis and avoid antisemitic canards and conspiracy theories.

We saw a little bit of this with groups like Momentum putting out videos responding to the antisemitic conspiracy theorist David Icke, and some of them were watched by millions of people. The problem is we were doing this too late.

SB: There is a lot of anger on the British left directed at both the real crimes of the Israeli occupation of Palestine and at questionable claims of antisemitism coming from the right. That anger has been a barrier to empathy during actual instances of antisemitism—as if antisemitism is no longer worth addressing when compared to seemingly larger, intractable issues.

DR: I suppose it’s different in Britain than the US because we mucked it up so badly here. To argue that antisemitism can wait until first we’ve sorted out every other problem in the world doesn’t wash.

My book includes a long section explaining why we must be explicitly pro-Palestinian and a detailed explanation of what is going on in Israel/Palestine. I read up on arguments within Palestinian circles in the 1980s and 1990s, and I tried to show the positions taken by leading Palestinian writers like Edward Said, and how they fought against antisemitism and Holocaust denial on the fringes of pro-Palestinian politics. We need to get to the point where we can say: “I’m pro-Palestinian. That’s why I’m against antisemitism, because I don’t want to give the other side an easy argument.”

Shane Burley is the author of Why We Fight: Essays on Fascism, Resistance, and Surviving the Apocalypse (AK Press, 2021) and Fascism Today: What It Is and How to End It (AK Press, 2017). His work has been featured in places such as NBC News, Jacobin, The Daily Beast, Truthout, Al Jazeera, The Independent, The Baffler, Full Stop, Haaretz, and Roar Magazine.

Newsletter
Interrogating the “New Antisemitism”
In a new book, Antony Lerman demonstrates how Israel and its advocates have redefined antisemitism to include all criticism of the Jewish State.
Shane Burley
Sign up for our email newsletter, featuring exclusive original content
Want original reporting and analysis on Israel/Palestine?
Sign up for the Tuesday News Bulletin.