AVROM YANOVSKY (1911-1979) was a Canadian political cartoonist whose work appeared in a series of leftwing newspapers and magazines from the 1930s on. His cartoons were signed “Avrom,” his comic strips (fewer in number) “Armand.” His strips of the post-war 1940s included “Hugh Dunnit,” about a private detective; “Shasha and Masha,” featuring two Russian anti-Nazi guerrillas; and "Major Domo and JoJo," featuring undercover agents for the United Nations; Major Domo had no arms, having lost them in the Battle of Arnheim during World War II, and Jojo was a pint-sized anti-Nazi partisan. Yanovsky said that he was offended by the Anglo-American bias of most Canadian comic strips after the war, and created his strip to offset the prevailing Cold War propaganda.

Born in the Ukraine, Yanovsky came to Winnipeg at age 2. The 1919 Winnipeg general strike and his education at the leftwing secular Jewish Peretz school in that city inculcated his revolutionary politics. After moving to Toronto, he either worked (so say two different sources) as a leather cutter or for the city’s pest control board. His wife, Nachamay, taught Yiddish at the Morris Vinchefsky school and sang in the Yiddish folk choir. Their son, Zal, born in 1944, would become the co-founder, with John Sebastian, of the folk-rock band, The Lovin' Spoonful.

Avrom Yanovsky was active in the Toronto art scene generally. He was a friend to many Canadian artists, including A. Y. Jackson, one of the founding members of the Group of Seven, also known as the Algonquin School of landscape painters. Yanovsky was also an important figure in the theater of social protest that swept across Canada in the mid-1930s via the Progressive Arts Clubs of Toronto, Winnipeg, Vancouver, and Montreal. (In 1933, over sixty towns, villages, and cities in Canada had socialist arts clubs.) Yanovsky was one of the founders of the Toronto club (along with Stanley Ryerson and Edward Cecil-Smith). He designed sets, of course, but also acted, for the Worker’s Experimental Theatre. He accompanied the casts on tour, starting with the first offering (June 3, 1932) of a short play called Solidarity, Not Charity, done for Workers’ International Relief. He complemented that and other performances with a “chalk talk.” As he described it, “You have an upright easel on the stage . . . with sheets of newsprint on it, and lecturer’s chalk . . . . I had prepared in my mind humourous cartoons of political events and I talked about each one.”

LEFTWING ARTISTS of the 1930s were engaged in a familiar battle with an art establishment that set abstract or eternal beauty in direct opposition to social value: art versus propaganda, as the practitioners of the former called the latter. In Canada, the high ground was occupied by the descendants of the Group of Seven, who identified Canada with its wildnesses of forest and water. The social critic Frank Underhill attacked these painters for turning their backs on social conditions. Such art, Underhill argued, “was firmly implanted in capitalism and [was] itself the art of the ‘ruling class.’”

This distinction between art (good art) and propaganda (bad art), held over artists like a sword for so long, has been vigorously contested in the decades since. The distinction itself is no longer seen as aesthetic truth but as a product of Cold War thinking, which sees "us" as open and free to the noblest impulses while our enemy is committed to narrow doctrinaire positions.

Both social realism and socialist realism were devoted to reflecting the harsh and painful side of contemporary life, its scars and sores, as deeper and truer than the dominant middle-class worldview, cushioned and covered up as it was by the trappings of affluence. Socialist realism felt a further obligation not merely to reflect, but to interpret, social ills -- to offer social and political critique. These artists tried to show what was behind and beyond what was apparently out there, a task that garnered bottomless scorn and contempt from mainstream artists and critics.

It was the French existential philosopher Jean-Paul Sartre who worked out most fully, in What Is Literature? (1947), the arguments for the necessity of socially-engaged writing (écriture engagé). Sartre believed that “one can only be deemed free if one is prepared to make use of one’s freedom,” and “every work of art bears a conception of human freedom and . . . of the ways in which it can be used, either to live in the world or to change it.”

Of all the Western nations that experienced economic crises and severe working-class poverty, labor unrest, and governmental oppression in the 1930s, Canada produced the least art of outrage and protest. What little it did produce was reticent and ambiguous. Marylin McKay suggests a number of reasons for this (in “Canadian Political Art in the 1930s,” in The Social and the Real, edited by Alejandro Anreus, 2006): the conservative nature and small size of the French and English populations; the repressive clericalism of French Canadian society; the xenophobic and antisemitic nature of Canadian society (given that many of the activists were immigrants and Jews); and the lack of any federal programs to support the arts. Even though a significant number of people in English Canada were active on the left, and many of them were artists, the art produced was only indirectly or vaguely critical of the dominant society and its institutions. As Underhill wrote: “There is not much sign that Canadian artists have been moved by the phenomenon of a civilization dissolving before their eyes.”

Avrom was not the only leftwing political cartoonist in Canada, but one of a very few. Henry Mayerovitch, Ernst Neumann, Nathan Petroff, Laurence Hyde, Fritz Brandtner, Leonard Hutchinson, and Louis Muhlstock also contributed political graphics to Communist newspapers. One of the members of the original Toronto Progressive Arts Club was a cartoonist named Richard Taylor, who produced a Communist comic strip. Taylor emigrated to the States in 1936 and contributed cartoons to the New Masses, before eventually becoming a New Yorker cartoonist.

But Yanovsky remained an engaged leftwing artist throughout his life. Even his drawing style — "angular, animated and wild," writes Ivan Kocmarek at the Comic Book Daily website — was "untypical of main comic book fare from the period and exceedingly effective." Anna Hudson, curator of a 2005 York University exhibit of Yanovsky's political cartoons, describes his work as "animated by a cast of easily recognizable characters: the moneybag, the banker, the capitalist, and the politician-with his police or military sidekick. [Avrom] saved the leading role for the worker: an idealized representation of Labour, who endured the endless greed and buffoonery of capital and political power. We can laugh at the tragedy of economic inequity because Avrom speaks to us personally to remind us of our humanity, our common ground, and our collective strength."

Marty Roth is a contributing writers to Jewish Currents who appeared here most recently with "Is Ignatz Mouse Jewish? (Is Mickey Palestinian?)" 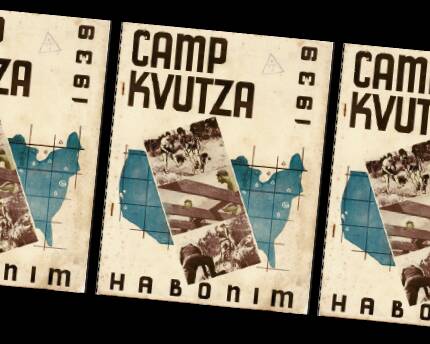 Report
Revising the Dream
Members of the socialist-Zionist youth group Habonim Dror North America are increasingly pushing back on Zionism’s centrality in the movement.
Mari Cohen