Avodah Considers Stepping Out on Israel/Palestine

Under pressure from constituents, progressive domestic Jewish groups may break their silence on the occupation. 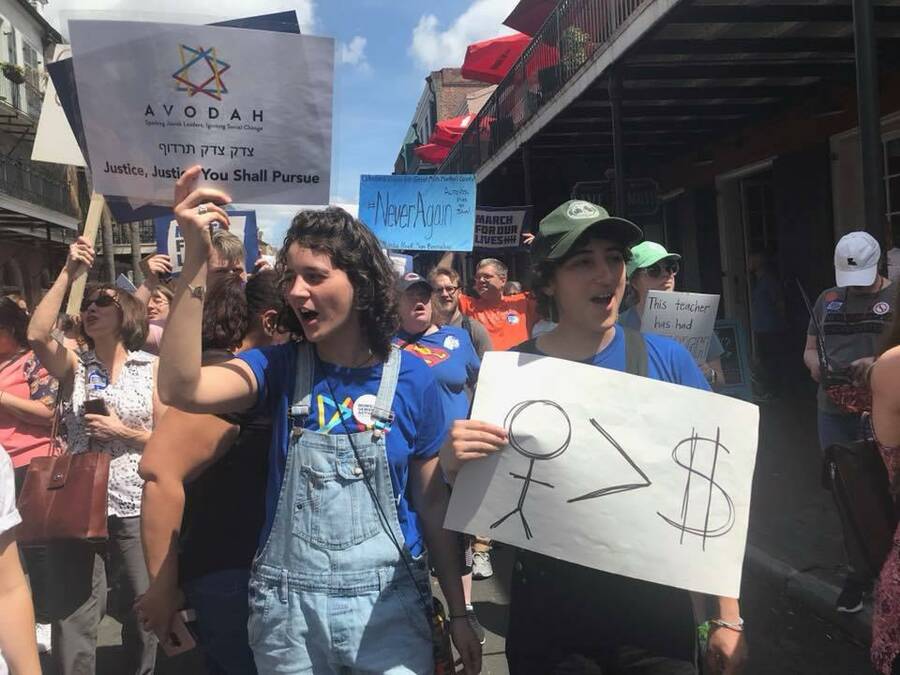 IN 2012, when a joint alumni group for the Jewish social justice organizations Avodah and American Jewish World Service announced it would hold a service trip to Israel without bringing participants to the Palestinian territories, the move caused a furor in the Avodah network. One hundred program participants and alumni signed a petition criticizing the trip for failing to acknowledge the occupation, and accusing Avodah, one of the rare Jewish organizations that welcomes critics of Israel and anti-Zionists, of failing to live up to its values. An Avodah staff member resigned in protest. Eventually, Avodah pacified critics by re-making the itinerary to include service work and tours in Palestine. But since then, the organization—which runs social justice communal living programs and fellowships for young adults across the US—has avoided such trips, adhering to an official policy of taking no position on Israel/Palestine or other international issues.

Now, however, as Avodah announced to alumni on June 29th, the group plans to organize a task force to reconsider this stance. CEO Cheryl Cook told Jewish Currents that the board had already intended to create the task force before being delayed by the pandemic. Yet the plan’s official announcement was prompted by a letter that program participants and alumni delivered to Avodah leadership in late June calling for the organization to take bolder action. The letter’s 274 signatories asked Avodah to endorse the Boycott, Divestment, and Sanctions (BDS) movement, and to make a statement supporting bills that would block or restrict military aid to Israel.

“Avodah’s refusal to take a position on the occupation up until this point has felt like a major conflict [with] our shared values of collective liberation, antiracism, and social justice,” wrote Joanna Kaufman, an alum of the 2016–2017 Avodah service corps program in New York, in one of many personal testimonials accompanying signatures to the letter. “The time is now.” (Full disclosure: I participated in the Avodah fellowship in Chicago in 2017–2018.)

Avodah is one of several domestic Jewish social justice organizations—including Repair the World and Jews for Racial and Economic Justice (JFREJ)—wrestling with their approaches to Israel/Palestine in light of the eruption of violence in Israel and Palestine in May. Historically, many such organizations have declined to take a public position on the subject, arguing that international politics are outside the scope of their work on poverty, racial justice, and other issues in the US. Previously, even this strategy of silence sent a message in the American Jewish institutional landscape, where most organizations assume Zionism as a default position and focus heavily on Israel programming. “For so long, every organization in the American Jewish community worked on Israel,” said Cook. “When Avodah emerged, it was unique to have a service corps that focused on the United States, on pressing issues here.”

The group’s reticence also permitted it to maintain a big tent of participants with a range of stances on Zionism, and to preserve relationships with major Jewish philanthropies: Funders with pro-Israel politics have long felt free to support domestic progressive organizations because their grantees make a hard distinction between the diaspora and Israel/Palestine, according to Lila Corwin Berman, a professor of American Jewish history at Temple University who studies American Jewish philanthropy. Now, however, as young American Jews grow increasingly critical of Israel’s occupation—in a recent poll by the Jewish Electorate Institute, 38% of Jews under 40 said they believe Israel is an apartheid state—organizations like Avodah may have to risk alienating some sources of funding in order to maintain credibility with participants interested in social justice. “Discussions about different kinds of intersecting forms of justice, about decolonization, have made it much more difficult to draw that line,” Corwin Berman said. “That separation that was so convenient doesn’t seem like it’s going to be sustainable.”


THE ORGANIZATIONS facing pressure from alumni and members to move left on Israel/Palestine are starting from a range of stances on the issue. Like Avodah, the social justice organization Repair the World, which coordinates Jewish volunteer and fellowship programs across the US, currently has no official position. In June, all but two of the nonprofit’s 22 2020–21 fellows delivered a letter to leadership asking the organization to condemn ethnic cleansing in Palestine and to include education about Palestine as part of its programming. New York City’s Jews for Racial and Economic Justice (JFREJ), on the other hand, has opposed Israel’s occupation of Palestine since its founding in 1990: The group’s first-ever public event was a Shabbat to welcome Nelson Mandela to New York after other Jewish organizations shunned him for using the term “colonialism” to refer to the occupation of the West Bank and Gaza. Now, members are lobbying the organization to go further and endorse BDS, and leadership is considering surveying members about how to respond to recent events. “JFREJ will be behind the curve unless they take a stronger position,” said Esther Farmer, a member of JFREJ’s Sephardi/Mizrahi caucus who also serves on Jewish Voice for Peace’s New York City leadership team, and who is pushing for the endorsement of BDS.

JFREJ, which already frequently positions itself as a dissenting voice against the Jewish establishment, may not have to worry as much about alienating financial supporters—but for other groups, denouncing the occupation could come at a financial cost. Both Avodah and Repair the World receive funding from the Schusterman Family Philanthropies, which also funds many Jewish organizations with an explicitly Zionist bent, including Birthright Israel and the Israel on Campus Coalition. Avodah’s controversial 2012 trip arose at the suggestion of the philanthropy, and alumni speculated at the time that the itinerary was devised under pressure from the pro-Israel funder. Cook said that funders would be among the stakeholders surveyed by Avodah’s task force, in addition to program participants, alumni, and staff, but that she didn’t anticipate that the task force’s decision would cause problems with funding. Repair the World CEO Cindy Greenberg said that funding would not be a factor in whether the organization takes a stance on Israel/Palestine. The Schusterman Foundation did not respond to a request for comment on Avodah and Repair the World’s decision process.

The question, to Corwin Berman, is whether funders will double down on their Israel-advocacy programming or agree to follow American Jews in a different direction. “One possibility is to say, ‘Avodah, we’re going to cut you off if you endorse BDS,’ but they might not want to do that if they want to remain relevant in the space of progressive justice oriented organizations,” she said.

Repair the World also maintains close ties to Jewish organizations that remain supportive of Israel’s current policies. In many cities, Repair fellows work closely with establishment organizations like federations; part of their strategy involves recruiting volunteers through mainstream Jewish networks. Taking a firm stance on Palestine could strain these relationships. But the former fellows pushing Repair to take a position argue that its credibility with mainstream institutions would make any action on the issue more meaningful. Ella Fies, who served as a Repair fellow in Miami from 2019 until 2021 and spearheaded the letter encouraging the organization to speak out about Palestine, said that when the organization declared its support for Black Lives Matter in 2020, the statement sparked productive discussions with Jewish partner groups. “I don’t think a statement changes anything, but it certainly provides space for necessary conversation,” Fies said. After Israel’s bombing of Gaza in May, she said, “I was so upset that they didn’t say anything, knowing the power of Repair saying something.”

In response to the letter from the fellows, Repair CEO Greenberg has pledged that the organization will include “meaningful learning about Israel/Palestine as part of our fellows’ arc of learning next year,” and will consider its approach to Israel/Palestine as part of a larger task force on civic engagement. Fies said that she was heartened by Greenberg’s response, if not overly optimistic about what the CEO will be able to accomplish within the organization’s structure. “I think there’s a part of her that would love to be able to hold more space for this conversation, but Repair’s strategy is that they want to make sure that everyone of all beliefs and backgrounds feels welcome at Repair’s table,” she said.

After all, if organizations like Repair and Avodah adopt a more explicit stance of solidarity with Palestinians, they are sure to alienate some participants. In an email to Jewish Currents, Danny Brown, an alum of the 2017–2018 Avodah Service Corps in Washington, DC, described feeling concerned when, in response to Cook’s announcement about the task force, Avodah’s email listhost for alumni was “quickly flooded with celebratory messages, encouraging Avodah to take a critical stance on Israel.” “Many also carried within their tone an assumption that a strong critique of Israel, and only a critique of Israel, is the ‘correct’ and only stance to take as a leftist, as a liberal, and as a champion of human rights,” wrote Brown. “To that, I disagree. I hope Avodah does not take any stance on Israel/Palestine except to commit more to a well-rounded education.”

According to Cook, the Avodah task force—which will be composed of staff, alumni, and board members—is expected to deliver recommendations sometime in the next year. Repair the World did not provide a timeline for when their internal conversation will advance. While the results of Avodah and Repair the World’s processes may not yet be clear, the fact that the organizations have agreed to undertake the work in this moment is in itself a sign of a transformation in the Jewish communal conversation on Israel/Palestine. JFREJ Executive Director Audrey Sasson said in her experience, it’s become crucial to engage: “In coalition spaces [Israel/Palestine is] always going to come up—you can’t pretend that it’s not there,” she said. She sees the shifting political landscape as an opportunity for progressive organizations to be moved by their members. “We used to be afraid that we would fall apart if we talked about this,” she said. “We’re not afraid of that right now.”