An Argument Among Friends 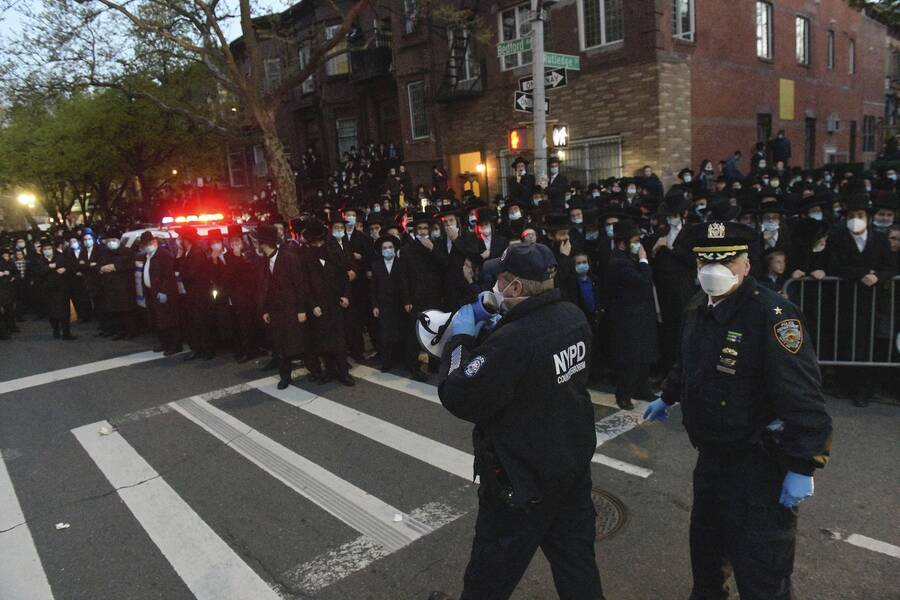 WHEN THE LOCAL POLICE PRECINCT began to lose control of a large, outdoor Hasidic funeral in Williamsburg, Brooklyn, on Tuesday, Bill de Blasio went to join the dispersal effort himself. Later that night, he fired off a strongly worded tweet. “My message to the Jewish community, and all communities, is this simple,” he wrote, “the time for warnings has passed.” The mayor’s remarks prompted condemnation across the Jewish political spectrum. Anti-Defamation League CEO Jonathan Greenblatt charged de Blasio with “generalizing against” all Jews, while a strongly worded letter signed by many of the city’s liberal Jewish groups accused the mayor of fueling “the anti-Semitic hatreds that bubble beneath the surface of our society.”

Yet the ongoing outrage over de Blasio’s remarks only captures part of the story. The funeral that the mayor attempted to break up had, in fact, been coordinated with the NYPD—a kind of clearance few of the city’s other minority communities could have obtained. That the mass funeral was allowed to proceed in the first place speaks to the decades-long working relationship between de Blasio and many of the city’s Haredi leaders. In many ways this relationship has been a conventionally transactional one: the mayor receives support during elections from a large voting bloc, and in exchange Haredim are granted relative autonomy on issues from secular education in yeshivas to matters of zoning. Now, the exigencies of managing a public health emergency that crosses communal boundaries are testing the limits of this arrangement.

De Blasio has long counted on backing from Orthodox Jewish leaders, who in turn have counted on him to be responsive on key issues. “De Blasio’s been a real, real friend of the Orthodox,” Haredi writer Meyer Labin told me. “He’s been kind of a ‘Jew of honor’ for decades.” De Blasio began his electoral career as the city council member representing New York’s 39th district, a Brooklyn district that includes parts of the tony Park Slope neighborhood where he lives, as well as parts of the heavily Orthodox neighborhood Borough Park. He was popular, reelected with 72% of the vote in 2002 and 85% in 2005. “Bill, for all practical purposes, is part of the Jewish community,” Orthodox political operative Ezra Friedlander told Tablet in 2015.

When de Blasio ran for mayor in 2013, after a stint as New York City’s public advocate, he campaigned vigorously for the Orthodox vote. That year, on a visit to the Borough Park offices of The Jewish Press, a right-wing Orthodox newspaper, de Blasio vowed to restore childcare vouchers, which had been cut by Michael Bloomberg’s mayoral administration, and which had become an important issue for yeshiva-attending communities. De Blasio also campaigned on a promise to walk back restrictions on metzitzah b’peh, a ritual practiced in some Orthdodox communities in which a mohel performs oral suction to a circumcision wound during a bris; the practice had become a politically-charged issue during Bloomberg’s administration, and the mayor had banned it. De Blasio’s avid courting of Orthodox leaders earned him the endorsement of leading members of Agudath Israel, the umbrella organization of Haredi Jewish communities in the US. “Bill de Blasio has time and again been there for the frum community throughout his years in city government,” Agudath chairman Sholom Werdinger told the Haredi newspaper Hamodia two months before the mayoral election.

As mayor, de Blasio has delivered on many of his promises—and more. His administration relaxed the restrictions on metzitzah b’peh in 2015 (although in 2017 it reversed course after an uptick in related cases of neonatal herpes). More recently, a state inquiry found that de Blasio had engaged in “political horse trading” when he delayed the release of a report on the quality of secular education in Haredi yeshivas. While many Orthodox leaders have long construed state monitoring of yeshiva curricula as an undue imposition, supporters of increased secular education in New York yeshivas have strongly criticized the mayor’s willingness “to trade away the education of tens of thousands of students for power and political influence,” as Naftuli Moster, executive director of education advocacy group YAFFED, told The New York Times last December.

De Blasio even relied on Haredi support during his short-lived presidential bid. Last August, members of the Satmar Hasidic sect, many of whose members live in the Williamsburg neighborhood of Brooklyn, circulated a Yiddish-language fundraising appeal asking 10,000 donors to give one dollar each, in order to put de Blasio over the requisite donor threshold to appear onstage at the September debate.

Viewed against the backdrop of this long history of support from New York’s Haredi leaders, de Blasio’s decision this week to break up the late Rabbi Chaim Mertz’s funeral appears to have been the product of a combination of self-aggrandizement and misplaced familiarity. “He thought he had a special relationship with the Orthodox community,” Labin said. “In a way he thought he was channelling that.” De Blasio, it seems, mistook his personal relationships with Orthodox leaders and communal representatives for a wider kind of authority with New York’s Haredi population.

In reality, then, de Blasio made not one but two errors when he tweeted his “message to the Jewish community” on Tuesday night. First, in chastising an imagined, singular “Jewish community,” he held all Jews accountable for the actions of a small group. Second, he assumed, in light of his longstanding political relationships with various Orthodox leaders, that he had license to do so. It was a misstep characteristic of much of the mayor’s recent career. What was presumably intended as a gesture of familiarity and closeness to Haredi Jews in New York—“tough love,” as he said during a Wednesday press conference—appeared as the opposite.

His antics touched an already sensitive nerve. Williamsburg, Borough Park, and other heavily Orthodox neighborhoods have been among the hardest hit by the pandemic. And even before Covid-19, New York’s Orthodox communities had weathered a difficult year, marked by a spate of violent antisemitic attacks last winter. By singling out the “Jewish community” by name, and by making an example of Congregation Tolath Yaakov, in whose beit midrash Mertz’s funeral was held, de Blasio demonstrated a serious disconnect from the very communities whose leaders he prides himself on being close to.

While many in New York’s Haredi communities have expressed frustration with what they feel is a disproportionate media focus on Orthodox outliers failing to abide by the rules, the period of the pandemic has also seen intense, sometimes acrimonious, intra-Orthodox debates, often unfolding on the messaging software WhatsApp, about what to do about those who do fail to observe social distancing guidelines, whether in synagogues or large gatherings like funerals. Some members of Orthodox communities have taken to social media, posting pictures or videos of open shuls and schools, or circulating lists of shuls and mikvahs that remained surreptitiously open. More recently, a growing sense that the worst of the pandemic has passed has led some Orthodox synagogues to reopen, a young man from a Brooklyn Hasidic neighborhood told me (he asked to remain anonymous to avoid potential communal backlash).

Many of New York’s Orthodox groups appear eager to forgive de Blasio and move on. It seems that maintaining a useful political relationship is more important to them than the kind of public criticism preferred by the mayor’s critics on the right and the left. The Satmar leadership issued a statement defending de Blasio on Friday. “We strongly denounce the attacks against the Mayor, particularly those accusing him of antisemitism,” it said. “The close relationship between Mr. De Blasio and our community go back close to two decades, during which time we have come to know, respect and appreciate his understanding and sensitivity to the unique needs of our community.” Agudath Israel issued a statement on Wednesday that gently rebuked de Blasio but refrained from maligning his intent: “The mayor expressed regret this morning for the way his words were taken. We agree with that sentiment. No matter how well-intentioned the Mayor might be, words that could be seized upon bigots and anti-Semites must be avoided at all costs.” Congregation Tolath Yaakov, which organized the funeral, even issued an apology: “We thought that the procession will be in accordance with the rules,” the group said. “We know that the mayor’s reaction came from his concern for the health and safety of our community and the entire city, and it wasn’t ill-intentioned.” Meanwhile, the letter criticizing de Blasio for “scapegoating the Jewish community,” spearheaded by the liberal New York Jewish Agenda and Jews for Racial and Economic Justice (JFREJ) was signed by none of the major Orthodox or Haredi groups.

De Blasio’s botched handling of Tuesday night’s funeral can be added to the ever-lengthening list of the mayor’s mistakes, the gravest of which is his administration’s delayed response to the pandemic, which has cost innumerable lives. But if there was an element of antisemitism in de Blasio’s remarks, it was less that he addressed “the Jewish community” as a whole instead of one specific Jewish community, and more that, because of his close ties to particular Haredi political operatives, he felt he could.